Most changes affect the Query Builder in the DynamicGroup Console for group-specific queries.

DynamicGroup 2018 has been released – click here for the latest version

When changing the group name of an existing group, DynamicGroup changed the attribute SamAccountName. With this 2015.2 update, the cn attribute (common name) will be adjusted as well. To avoid compatibility problems, special characters in the SamAccountName (like []/\’) are now automatically removed when saving dynamic groups.

DynamicGroup allows QueryConditions to be configured in the builder, and at the same time in the LDAP filter field. In order to ensure that the correct values are accepted, the user now receives a messages. You can choose to convert the  Query Conditions to a new LDAP filter or to keep the one from the filter box below. 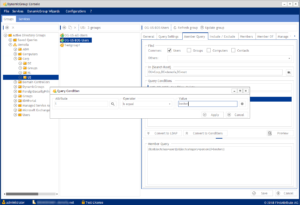 Dynamic groups that generate members from include and exclude lists only, have not been calculated by the service every time so far. Since Version 2015.2 the service considers these groups as well. This function is useful when group nesting should be reduced.

The “flat group” option allows you to add groups as member of a dynamic group, but considering the groups’ users only. The group itself does not become a member of the dynamic group. In version 2015.2 it is now possible to add users of other normal and dynamic groups using include lists – without having any other query filters set.

Many companies want to distribute permissions based on sites, subsidiaries[...]